Why Onion Rings Are Non-Vegan

One of the many helpful services that eggs do is binding. Eggs also perform a variety of other essential functions. Quick bread is used as the breading and battering component in the preparation of onion rings. The batters for these baked goods are combined extremely rapidly, which does not provide much time for the development of gluten.

Gluten is a kind of protein that is found naturally in wheat flour. It is responsible for giving baked goods a wonderful elastic shape and allowing components to stick together. In addition, batters are distinct from dough in that they often include a significant amount of water, which is counterproductive to the formation of gluten.

Eggs are a perfect example of this. The eggs provide an additional source of protein in the diet. The structural stability of the breading is provided by the egg proteins, which combine with the other components, then become rigid throughout the cooking process.

Eggs are great for binding since they have a high protein content, which is why eggs are so often used. Either the onions are coated in a batter that contains egg or they are dipped in a dish of beaten egg and then tossed about in breading. Both of these processes are followed by frying the onions.

The egg protein is coagulated when it is exposed to heat during the cooking process. This creates an adhesive that binds the other components to the surface of the item that has been cooked. When the combination is cooked, the proteins become rigid and contribute to the mixture’s structural strength.

This is due to the fact that certain recipes do not include eggs in the batter. They don’t stick together as well, but they have textural qualities that some individuals find more appealing than other options.

Unfortunately, milk is often used in place of eggs whenever eggs are not present in onion rings. After being dipped in a milk mixture that has a variety of different flavors, the onions are then rolled around in a dish of flour. This process is repeated many times.

It’s fairly uncommon for restaurants to use a batter for their onion rings that includes milk and eggs, which is problematic for vegans on two fronts. Vegans will need to exercise more caution when it comes to onion rings, whereas lacto-ovo vegetarians don’t have anything to worry about in terms of eggs or milk. 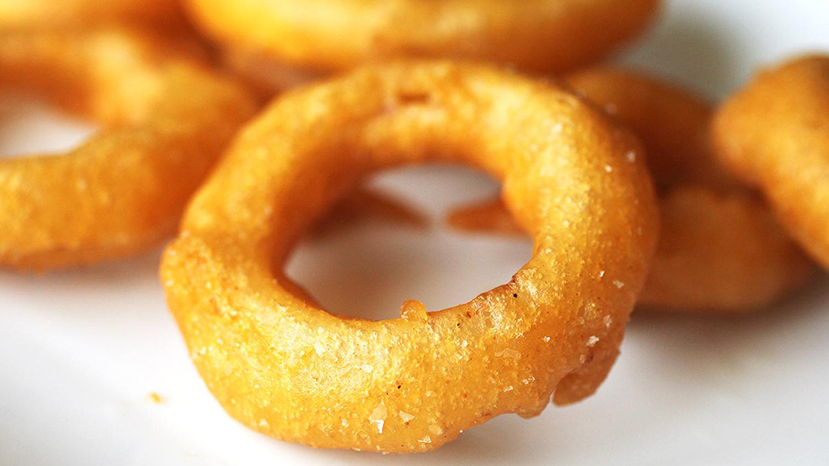 Do onion rings usually have dairy?

Most onion rings are made with dairy products, such as milk or butter. However, there are some recipes that use non-dairy alternatives, such as plant-based milk or margarine. Dairy-free onion rings are usually just as delicious as their dairy-filled counterparts.

Do onion rings have egg?

Do onion rings have egg in them? The answer is no. Onion rings are made with flour, bread crumbs, and spices. Some recipes may call for a beaten egg to help the breading stick to the onions, but it’s not necessary. You can easily make onion rings without egg.

How can I make onion rings without eggs?

You can make onion rings without eggs by coating the onions in a mixture of flour and water. Then, you’ll need to bread the onions by dipping them in bread crumbs. Finally, fry the onions in oil until they’re golden brown.

What is onion ring made of?

In most cases, they are created using an onion “ring” that has been cut into a cross-section and then coated in batter or bread crumbs before being fried in oil; another variation uses onion paste. Onion rings are often consumed on their own, despite the fact that they are most frequently offered as a side dish.

Onion rings are often available in both vegan and non-vegan varieties. On the other hand, it is dependent on the type of frozen onion rings that you purchase as well as the restaurant that you go to.

It is likely that most restaurants will make onion rings with milk and eggs because that is how they have traditionally been made, and it would appear that such ingredients help with the texture. However, you can find vegan options at some fast-food restaurants like Sonic Drive-In, Pizza Hut, and Fatburger.

If you are unsure as to whether or not certain onion rings may include animal components, you should get in touch with the manufacturer of the product or chat with the personnel at the restaurant, as they should often have an allergy menu that you can peruse.